A little over two years ago I became a chicken mama when a stray wandered into our yard. We decided to keep it and bought a companion chicken. After many adventures in chicken farming, I am dealing with the death of one of our girls. I shared many stories about our Red Star and I referred to her as the “big chick.” Our other chicken is a Bantam so she was aptly named the “little chick.”

It seemed fitting to me to share a few memories and pictures of the big chick. She was so full of life and I can’t believe she is gone. I have shed so many tears for her that I really surprised myself. Our relationship was not all bright and sunny. She was a bit of a bully and always made it difficult for the little chick to eat because she thought only with her belly.

She started out as a very productive egg layer. Even in the coldest winter weather, we could count on her to produce. I was never an egg person, but she layed some pretty tasty eggs. The problem was when she started laying eggs that were too big. I really believe this took a toll on her body. She started laying soft shell and no shell eggs until she eventually stopped laying.

She did  provide a lot of entertainment. She loved treats and when we walked out the door treats in hand, she was quick to come from wherever she happened to be ready to gobble something up. In the beginning she even tried to knock treat bags out of our hands. She spent a lot of time looking in through the screen door. She was a master beggar. She was a very good garden helper. I loved seeing my husband in the garden with her near by doing her part by going after all the garden pests. I include a picture that just makes me smile whenever I see it.

She was a funny girl. Our little chick can go so many more places because of her size, but that didn’t stop the big chick from trying to go where the little one went. One time she became trapped in between the house and a rain catcher. I had to empty out the rain catcher to free her. Whenever the little chick would find a little space to lay her eggs, the big chick barreled her way into the spot even if it was too small. 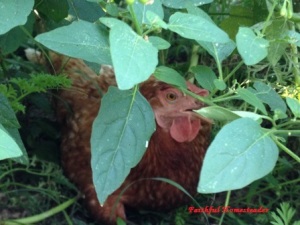 I couldn’t find her one day when she was hiding in the carrot patch.

She was a pretty chicken and I loved her little fluffy butt. I think anyone with chickens can understand that. Her death hit me pretty hard. I had in recent weeks spent time giving her meds and bathing her.  That kind of activity drew me closer to her. We thought she was better and she mostly seemed okay.

A few days ago when I went outside to check on the girls and she did not come out for treats, I was concerned. She was just hanging out under the deck just mostly standing there and she did it for hours. When it was time to come into the coop, she didn’t go.

My husband was able to get her from under the deck and immediately he said she was dying. We put her in a container with fresh straw and brought her inside to monitor her. She was initially quiet and just laying down, but then she started flailing. My husband talked about putting her out of her misery, but it seemed within just a couple minutes after that, she took her last breath.

I had a pretty good breakdown. I really questioned myself as a chicken mama. I wondered what I missed and what I did wrong. I know people can lose chickens for all kinds of reasons, but it didn’t make it any easier knowing these things happen. I know plenty of people will think it’s just a chicken, but some know better.

I appreciate the support I have had from friends and family. They know she was my pet and I put my whole self into trying to be the best chicken mama that I can be. It is not the same around here without her. The tone of the yard is so quiet and somber. She really was so full of life and quite the character. I do miss her. We have to move on without her and bring in some new chickens to keep the little chick company. It won’t be the same. She was one of a kind.

© Faithful Homesteader 2015. Unauthorized use and/or duplication of this material without express and written permission from this blog’s author and/or owner is strictly prohibited. Excerpts and links may be used, provided that full and clear credit is given to Faithful Homesteader with appropriate and specific direction to the original content.

20 thoughts on “Death of a Chicken”

Learning and sharing are great ways to make connections. If I learn something great, I don’t want to keep it to myself. I have educated myself about chickens, birds, and healthy homesteading.

Check out my weekly posts on GRIT

© Faithful Homesteader 2020. Unauthorized use and/or duplication of this material without express and written permission from this blog’s author and/or owner is strictly prohibited. Excerpts and links may be used, provided that full and clear credit is given to Faithful Homesteader with appropriate and specific direction to the original content.